The first-ever IUCN Africa Protected Areas Congress (APAC) took place from July 18-23 in Kigali, Rwanda. The Congress aimed to re-position protected and conserved areas in Africa within the broader goals of economic development and community well-being, and to increase public understanding of the role parks can play in conserving biodiversity and delivering the ecosystem services that underpin human welfare and livelihoods.

Responding to the dual crises of climate change and biodiversity loss, governments, NGOs and conservationists are aiming to place at least 30% (or more) of the planet’s terrestrial area under formal conservation by 2030. However, recent RRI research shows that between 1.65 and 1.87 billion Indigenous Peoples, Afro-descendant Peoples and local communities live in the world’s important biodiversity conservation areas — and the traditional protected area approach has historically conflicted with the territorial rights of these communities.

At APAC, RRI called upon governments to strengthen partnerships with Africa’s Indigenous Peoples and local communities—particularly the women within them—to adopt rights-based approaches to landscape restoration, conservation, and governance in accordance with communities’ self-determined aspirations.

To achieve this, RRI proposed securing the following:

Watch the conservation success story of the Ogiek of Mt. Elgon in western Kenya, produced and launched at APAC in collaboration with the Chepkitale Indigenous People Development Project (CIPDP).

THE OGIEK OF MT. ELGON

RRI IN THE NEWS

"We must understand the difference between true inclusion and tokenism. Don’t just invite Indigenous Peoples and local communities to conferences or include them in your press releases. Governments and conservation organizations must give them leadership roles. We must listen to them and let them lead with their ideas."
Dr. Solange Bandiaky-Badji, RRI Coordinator

1. Tenure and Beyond: The Effective Alternatives to Achieving the 30×30 Goals 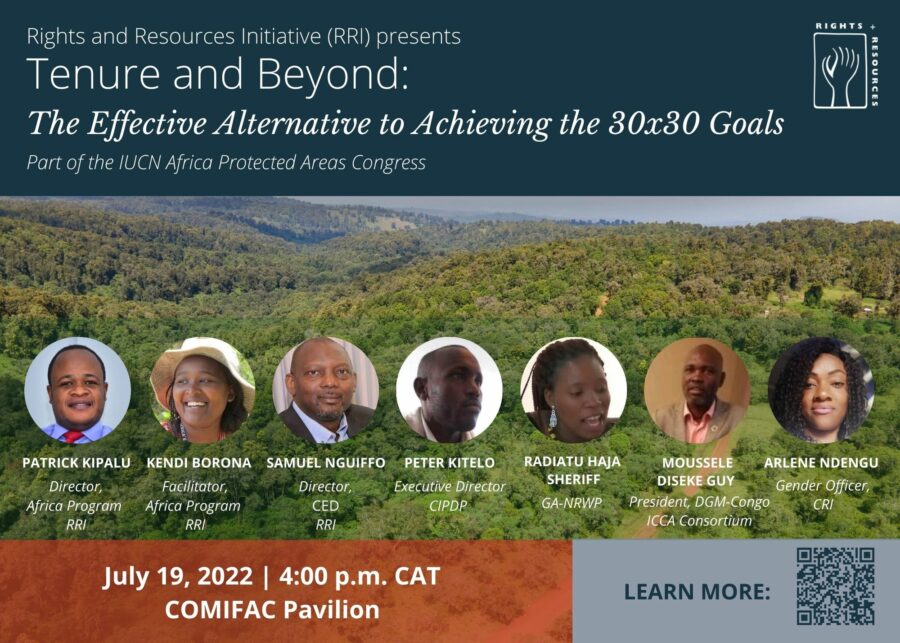 Organized by RRI, this panel presented the main findings of the coalition’s 30×30 analysis and drew from diverse country and stakeholder experiences to demonstrate effective community conservation actions. We looked at why strong governance and tenure rights are essential for achieving global conservation goals and creating lasting sustainable societies. In particular, this event contributed to the discourse on 1) land tenure and legal reforms; 2) the importance of creating enabling conditions beyond tenure; 3) the role of Indigenous and local community women in conservation; and 4) the key challenges they face in conservation. Read the speaker bios here.

2. The Project “Partnership for People, Nature and Climate” in the Congo Basin: Opportunities 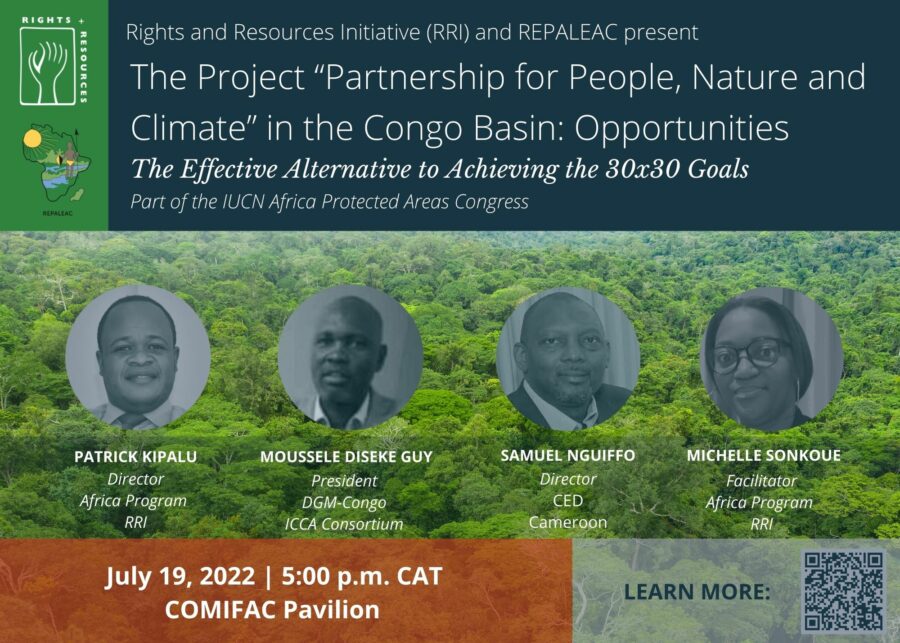 Organized by RRI and the Réseau des populations autochtones et locales pour la gestion durable des écosystèmes forestiers d’Afrique central (Network of Indigenous and local populations for the sustainable management of forest ecosystems in Central Africa—REPALEAC), this session presented the Partnership for People, Nature and Climate and explored opportunities of providing direct funding and organizational support to community conservation initiatives as well as to community land tenure struggles in the Democratic Republic of the Congo (DRC), the Republic of Congo (RoC), and Gabon. Read the speaker bios here.