National laws and regulations in low- and middle-income countries consistently fail to protect the land rights of women living in indigenous and rural communities, making them ill-prepared to reach the targets set by the Sustainable Development Goals or the Paris Agreement on climate change, a new report called “Power and Potential” released by the Rights and Resources Initiative, or RRI, reveals.

Women’s ability to access forests and to take part in decision-making regarding resource utilization is crucial to conservation and climate change mitigation efforts, the report notes. It also contributes to economic development at the community and national levels. But even in cases where community-level practices provide women with access to, and control over land, weak regulations on tenure rights increase their vulnerability to social, economic and environmental shocks.

“International laws have done a good job in addressing the need and importance of securing these tenure rights,” said Solange Bandiaky-Badji, RRI’s head of gender justice and Africa programs. “Most of the governments have ratified those international laws, but what is really missing are the national laws, safeguards and protection mechanisms that make sure that those laws are translated into practice.”

The results show that laws and regulations in these countries — otherwise called “statutory laws” — fail to meet the standards set by international agreements such as the Convention on the Elimination of All Forms of Discrimination against Women, known as CEDAW. They also constitute a barrier to reaching the targets set by the Paris Agreement on climate change, and by the SDGs in terms of gender equality, livelihoods, conservation efforts and economic development. While substantial variations exist between countries and regions, no country stands out as a champion of women’s tenure rights.

A deep dive on CBTRs

The RRI report looks at 30 low- and middle-income countries and examines 80 sets of laws and regulations framing the ownership or management of natural resources at the community-level, otherwise known as community-based tenure regimes. It does so by looking at three legal indicators at the national level, deemed essential for the protection of women’s forest tenure rights: Constitutional equal protection, affirmation of women’s property rights and inheritance. It also analyses five CBTR-specific indicators: Membership, inheritance in CBTR-specific laws, voting, leadership and dispute resolution. For more information, click here.

Insecure tenure rights have been shown to limit women’s choices concerning marriage and non-marital unions, leading to higher incidences of domestic violence, increased rates of HIV infections and diminished capacity to deal with the consequences of AIDS. By contrast, safe and secure land rights generate positive socio-economic outcomes for women, their families and the communities in which they reside.

“The role of land rights is very much linked to the respect of indigenous women’s rights, as well as enhancing their possibilities to make decisions related to how development should take place in their own communities,” said Victoria Tauli-Corpuz, special rapporteur on the rights of indigenous peoples to the United Nations, in an interview with Devex during the 16th session of the U.N. Permanent Forum on Indigenous Issues, where she spoke about engaging women in climate action.

Women play a crucial role in their communities by gathering and producing food and resources, preserving traditional crops, and resisting abusive exploitation or expropriation of their lands, she added.

“Usually the women are the ones who resist, and I have seen this in many communities,” said Tauli-Corpuz. 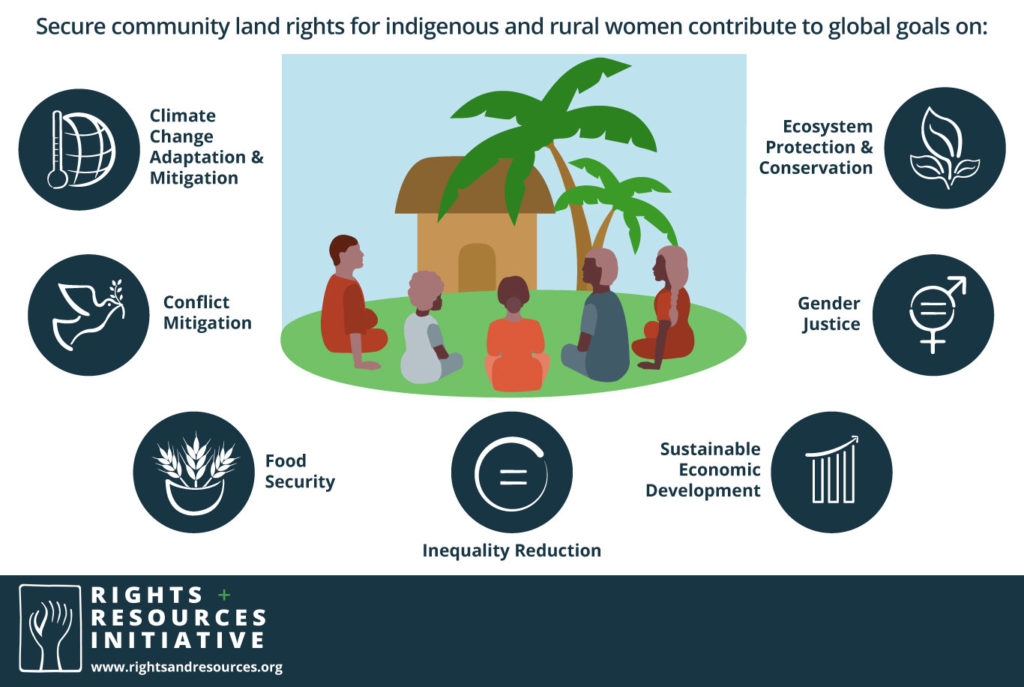 Guaranteeing access to land is not enough to provide women with full tenure rights. According to the report, insufficient inheritance laws at the national level, for example, can affect women’s right to the land after the death of their husband. Less than one third of the countries examined by the legal scan mandate that all daughters, widows and unmarried women in consensual unions have equal rights to inherit alongside their male counterparts, which limits the transfer of land ownership to women and their children.

Other legal factors such as the ability to own land, membership rights in the community and participation in local governance through voting or other forms of decision-making all play an important role in upholding the rights of indigenous and rural women.

“Women’s land rights and women’s rights to forests contributes to economic development,” she said, explaining that women’s rights should be seen as an enabler of economic growth.

In Burkina Faso, for example, women are deeply involved in the collection, processing and trading of non-timber forest products sold internationally. Their activity across the value chain benefits both the local and national economies.

“What we’re seeing in many countries is that the women who own land and are able to make good use of that land are using that money to pay for school fees, for example,” said Bandiaky-Badji. “That kind of contribution is key, because that’s what ensures that children are educated and can change the pattern of poverty.”

Tenure insecurity has been shown to be the main driver of poverty in forests and rural areas; migration patterns see more men leaving their communities to work in cities or for local resource extraction companies, leaving women with a greater responsibility to provide for their families.

Women as agents in the fight against climate change

Land tenure is also inextricably linked to environmental issues, as women are known to play a key role in protecting natural resources in their communities. By having greater control and ownership of the land, women have an incentive to protect local resources, Bandiaky-Badji said. Women are also disproportionately affected by climate change, natural disasters and large land acquisition, the report notes, which in turns impact the whole community.

Penny Davies, a program officer working on climate change and land use at the Ford Foundation, said the RRI report reinforces the idea that women play a key role in climate change mitigation.

“The only functioning, viable to scale, carbon-capture storage technology that exists are forests, via photosynthesis,” she said. “A third of the world’s tropical forests are managed by indigenous and local communities, and the backbone of that is the hands of women.”

Davies added that governments and development organizations should regard women living in indigenous and rural communities as essential partners in the fight against climate change.

“Forest women are a climate solution, and they need these community-based tenure regimes to ensure that that solution is not eroded by vested interests,” she said.

The report makes a number of recommendations for donors and development

organizations, including supporting the reform of national laws and regulations, as well as the recognition of equal forest rights of indigenous and rural women. It calls for development actors to adopt a gender lens when addressing issues affecting women’s tenure rights — such as indigenous rights, education, climate change mitigation and conservation efforts, and to increase collaboration and information-sharing among organizations working in these different sectors.

For RRI’s Bandiaky-Badji, the report fills a critical gap in the existing research around indigenous and rural women’s rights.

“The collective tenure rights of women have been missing from the feminist literature around women and the environment, and women and natural resource management,” she said, adding that the existing research tends to look at women’s access to land from an individual perspective.

Development organizations and corporations looking at implementing social programs in the communities in which they operate should make use of gender-disaggregated data to determine the specific needs of women, Bandiaky-Badji said. Above all, they should make sure that women are consulted and given a voice, and that conservation efforts benefit those who are on the frontlines of the fight against climate change.

How can the international community come together to tackle the inequality and the marginalization of women, indigenous peoples, and rural communities? Over the next six months Devex, and our partner the Rights and Resources Institute, will discuss the initiatives supporting land and resource rights and the role of stakeholders across sectors to partner for impact. Join us for the third international conference on community land and resource rights “Reducing inequality in a turbulent world: Scaling-up strategies to secure indigenous, community, and women’s land rights” in Stockholm, Sweden, on Oct. 4-5, for more on this topic.