Analyses
The Situation of the Térraba Indigenous People of Costa Rica: 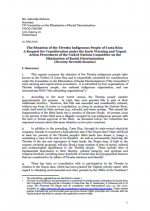 According to the most recent census, the Térraba people number approximately 750 persons. In 1956, they were granted title to part of their traditional territory. However, this title was amended and considerably reduced, without any form of notice or consultation, in 2004 by excising the General River, roads, land used by State services (e.g., schools), and water springs. This caused the fragmentation of the titled lands into a number of discrete blocks. At present, close to 90 percent of this titled area is illegally occupied by non-indigenous persons with the tacit or formal approval of the State. As discussed below, the Committee hasexpressed concern about this same situation on two prior occasions.