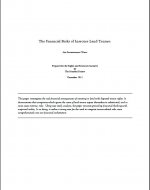 In recent years, one of the oldest asset classes in investment – land – has become an issue of international concern and scrutiny. Land acquisitions are being announced at a breakneck pace as companies look to produce more food, wood fiber, minerals and energy.The undeniably high and sustained profit potential of this land is thought to be offset by meager, manageable costs. Not only is the land itself cheap, but the ongoing outlays required to convert that land’s output into saleable goods is quite low. This all seems very compelling when confined to spreadsheets, but as these acquisitions become more common, we are beginning to see substantive discrepancies between investment concept and operational practice.In examining the evidence, a pattern emerges. Many investors and operators have committed time, money and effort without understanding some considerable risks, ones usually considered externalities in the normal course of business. This report gives perspective on one such risk. Completely unknown to most investors, “land tenure” is a catch-all phrase used by field specialists to define a set of problems related to control over a given parcel of land. Property rights in many emerging markets are dysfunctional to the point that ownership of land can be granted to an investor without the tens of thousands of people living on, or dependent on, that land knowing about it.This report shows that unresolved conflicts over land tenure significantly augment the financial risks for companies in infrastructure, mining, agriculture and forestry. By themselves, delays caused by land tenure problems can inflate a project's expenditures by an order of magnitude – and in some cases these losses have even been great enough to endanger the future of the corporate parent itself.