Analyses
Inclusion of human, ethnic and gender rights in the Nationally Determined Contributions (NDCs) of Colombia and Peru (in Spanish) 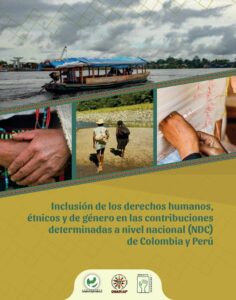 In December 2015, the Paris Agreement was adopted at the 21st Conference of the Parties (COP21) of the United Nations Framework Convention on Climate Change (UNFCCC).  Five years after the submission the NDC proposals and their initial implementation, signatory countries had to update and share the progress of their NDCs in 2020. This study carried out by Asociación Ambiente y Sociedad, ONAMIAP (National Organization of Andean and Amazonian Indigenous Women of Peru) and RRI analyzes the degree that human rights, women’s rights, and the rights of Indigenous Peoples and Afro-descendants are included in the NDCs of Colombia and Peru, as well as in the processes related to updating them.

The study found that the NDCs in Colombia do not refer to rights or link the importance of strengthening the rights of women, Indigenous Peoples, Afro-descendants and rural communities in the management of natural resources, nor consider their traditional knowledge as a key tool for adaptation and mitigation. There is no national system of adaptation indicators that allows for monitoring and evaluating the implementation of related measures nor a regulatory framework that includes education on climate change. There are also no established permanent capacity-building mechanisms with the academic, private, or public sectors.

The NDCs in Peru are incomplete and limited in their inclusion of a human rights, gender, and intercultural approach, given that there is a gap between the information included in documents such as the final report of the GTM-NDC (2018) and the concrete mitigation and adaptation actions. The study found that women’s groups and indigenous and peasant communities are not considered valid actors in the three NDC implementation phases. In addition, spaces for participation are restricted or limited, since in many cases they are informative, but not binding. In general, there is a violation of the right to participation, particularly for indigenous women, since this right is protected by Convention 169 of the International Labor Organization (ILO). Meanwhile the non-inclusion of Indigenous Peoples in all phases shows a breach of the Convention and of the national legislation that guarantees Prior Consultation for any activity that may affect the well-being and territory of Indigenous Peoples.