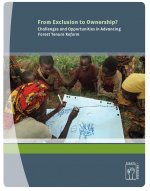 In 2002 “Who Owns the World’s Forests?: Forest Tenure and Forests in Transition” reported that in recent decades governments had begun to reduce their legal ownership and control of the world’s forests. The aim of this report is to measure whether this forest tenure transition continued in the 2002 – 2008 period, and to assess the implications of statutory forest tenure change for forest peoples, governments, and the global community.

The findings of this study show that despite a continued transition towards recognizing forest land access and ownership of local people, significant challenges remain. The report describes these challenges and provides recommendations on how the forest tenure reform process can be carried forward.