Farmers are rallying for the implementation of the Forest Rights Act, which gives them the right to govern forest resources, as a High Court order brands them ‘polluters’.

On July 25, around 2,000 farmers gathered in Himachal Pradesh’s remote tribal district of Kinnaur to highlight the threat looming over their land, forests and livelihoods. Against the background of green hills, they thundered chants as local leaders gave rousing speeches. When the assembly dispersed, the farmers were still unsure if they had been heard, whether their demand for the implementation of the Forest Rights Act of 2006 would be met, particularly after a recent High Court order.

The Himachal Pradesh High Court on April 6 had directed the government to evict all “encroachments on forestland” and destroy crops and fruit trees grown on government land. Abiding by the order, the Forest Department and the police started felling farmer’s apple trees, most recently in Shimla district on July 22.

For the farmers in the northern state, this is an anxious time. “The Parliament passed an act [the FRA] to provide land rights to forest-dwellers, and now the High Court is ruling contradictory to the law of the land,” said Ram Chandra Negi, general secretary of the Kinnaur District Forest Rights Committee, a community-based group founded in response to the court ruling. “It is very clear that until the recognition and vesting of rights is not complete, people cannot be evicted.”

The Forest Rights Act – short for the Scheduled Tribes and Other Traditional Forest Dwellers (Recognition of Forest Rights) Act – seeks to address the historical injustices perpetrated on tribal and other traditional forest communities. For centuries, tribal forest-dwelling communities conserved their environment while simultaneously depending on them for their livelihoods. This changed under the British Raj, with the colonisers making timber a state property and later exploiting forests commercially through laws.

The 2006 Act gives tribals and other traditional forest-dwellers clear rights to manage and govern their traditional forests and forest resources under the provision of Community Forest Resource rights. It shifts forest governance and ownership from a colonial centralised system to a democratic one where local communities are the legal owners of forests. The law’s section 4(5) reads: “Save as otherwise provided, no member of forest dwelling scheduled tribe or other traditional forest dweller shall be evicted or removed from forest land under his occupation till the recognition and verification procedure is complete.”

In Himachal Pradesh, a state with 67% forest cover, implementation of the FRA began in 2008 in tribal districts. By 2009, over 5,000 claims had been submitted to the government asserting individual and community forest resource rights. An additional 1,000 claims from non-tribal districts poured in later, owing to the efforts of community-based organisations. Of all these applications, however, the state government has so far accepted just 346 claims – for a grand total of less than 2 hectares of land.

Local activists say the state government believes the FRA is unnecessary and doesn’t need to be implemented because of earlier laws that designate the status and land use of forested areas. The Union Ministry of Tribal Affairs, which oversees FRA’s implementation, issued a letter to Himachal Pradesh in April 2014 clarifying that past forest settlement is not a replacement and that FRA must be implemented. On July 2 this year, the central ministry even told government officials that the state’s implementation of the law “has been dismal so far”.

Despite a request for comment, the Himachal Pradesh Forest Department did not respond. 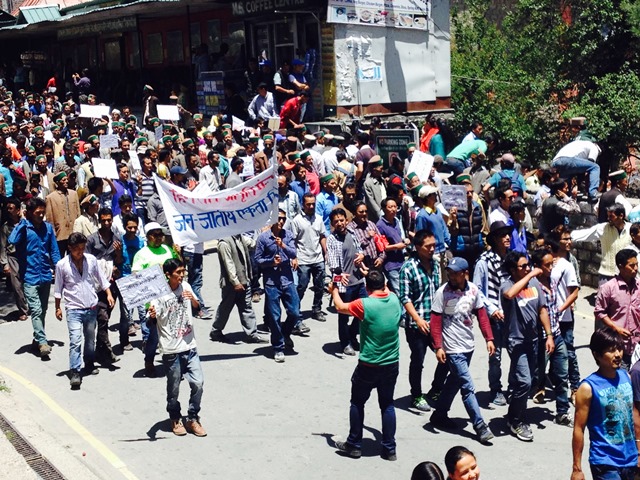 A study released in July revealed that the Forest Rights Act has the potential to recognise community resource rights for India’s 150 million forest-dwellers living on at least 40 million hectares of forested land (half of India’s forests). But thus far, the study adds, rights over less than 500,000 hectares have been recognised nationally. In Himachal Pradesh alone, the study indicates, rights over a minimum of 1 million hectares should be recognised under the FRA.

In this slow implementation, Himachal Pradesh isn’t unique. Across India, efforts have been made to implement the Act with varying degrees of success. Civil society organisations say there has been a lack of concerted effort to raise awareness about the FRA, especially its community rights provisions, resulting in insufficient pressure on local functionaries. Institutional difficulties – as exemplified by the Himachal Pradesh High Court ruling – also challenge the spirit of the Act.

Despite these challenges, impressive examples of livelihood benefits are arising from places where community rights have been recognised. In districts in Gujarat, Maharashtra, and Odisha, gram sabhas are earning lakhs of rupees by managing and harvesting forest products such as bamboo and tendu leaves (used to roll beedi cigarettes).

One argument made against granting land and forest rights to local communities is that it will increase deforestation and degradation of forests. The Himachal Pradesh High Court ruling too refers to local farmers as “polluters”, and invokes the 1992 Rio Declaration to demand that farmers pay compensation for the forestland they have occupied under the Polluter Pays Principle.

These arguments doesn’t take into account, however, the global evidence which suggests that when communities own, manage and control their forests, there are positive outcomes for the conservation and protection of natural resources and biodiversity.

“When Community Forest Resource rights are granted [under the FRA], resource rights will be in the hands of the people,” explained Guman Singh, coordinator of Himalayan Niti Abhiyan, a lead organiser of the movement to implement the FRA in Himachal Pradesh. “They can oversee the development of forests and you will see community-led conservation. You will never properly be able to conserve the forests if local people aren’t involved.”

Meanwhile, across Himachal Pradesh, resistance to the court ruling and the call to implement the FRA continues. Four days after the July 25 protest, several hundred farmers gathered in Bilaspur district to oppose eviction proceedings by the Forest Department. More rallies are planned across several districts in coming weeks. It is struggles like the one in Himachal Pradesh – and the response of state governments – that will decide whether India fully realises the FRA’s transformative potential.

As seen on Scroll.in