While land-related conflict in India has long posed a threat to communities’ security and investment in sustainable development alike, relatively little research has attempted to understand the costs of such conflict nationally. Two new analyses launched last week in a workshop held in New Delhi take an important step towards providing crucial data on the cost and impact of land conflict in India. The papers show that land conflicts in India affect millions of people and disrupt billions of dollars in investment, and that disputes over common lands–on which communities depend for farming, fishing, livestock rearing, salt manufacturing and grazing, and which are often sources of cultural and spiritual wellbeing–are more frequent than previously known.

What did we find?

The report Land Conflicts in India: An Interim Analysis, written by RRI and TISS, analyzes 289 ongoing land conflicts—around 25-40 percent of active and substantive land conflicts in the country. The report found that these conflicts have impacted 3.2 million people and posed a risk to over Rs. 12 trillion (US$179 billion) worth of investments. Three-quarters of these land-related conflicts involved common lands. More than 40 percent of all land-related conflicts analyzed involved forest lands, the majority of which occurred in regions where the state has failed to recognize the customary rights of tribal communities. 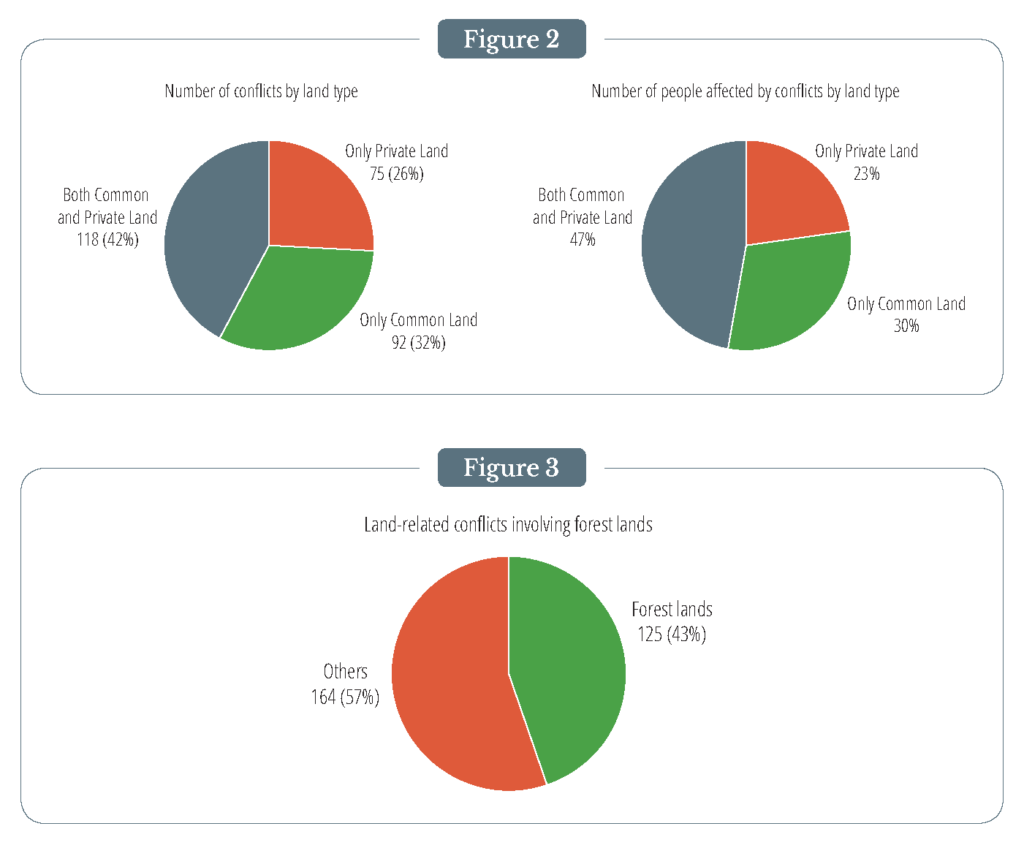 The second study, Land Disputes and Stalled Investments in India, used data from the Center for Monitoring Indian Economy’s (CMIE) CapEx database to better understand the causes and geography of stalled investment projects in India. The analysis found that 5,780–or 14 percent–of the more than 40,000 projects announced between January 2000 and October 2016 were stalled due to land-related conflict. Of 80 high-value stalled projects examined in the study, 21 projects—with total investments of almost Rs. 2 billion—were stalled due to land disputes. The study also contradicted the longstanding perception that conflict over private lands was the exclusive driver of land conflict leading to stalled projects, as the study found 15 percent of stalled projects occurred on common lands.

Together, these studies show that land conflicts are not limited to private lands, but rather that disputes over community and customary lands also play a major role in land conflict in India.

The reports provide revealing data and context on the scope of land conflict in India and its role in stalled projects, as well as the cost of insecure community land rights. RRI and ISB will continue to collaborate going forward to keep the data on land conflict in stalled projects up-to-date and to inform the state, investors, and communities in India on the risks posed by insecure land rights.

Yet the data also makes clear that the state must take action to address the causes of land conflict on common lands, which occurs when governments or private sector actors invest in lands on which communities depend and to which they have a right. The government must respect existing legislation protecting land rights and reassure India’s tribal communities that their rights will be respected. Without implementation of tribal and other communities’ land rights, competing claims between communities, governments, and investors will fuel land-related conflict and pose a grave threat to India’s economic development.

Read the full reports, “Land Conflicts in India: An Interim Analysis,” and “Land Disputes and Stalled Investments in India.” The reports were launched on November 16, 2016 in a workshop held in New Delhi and organized jointly by the Rights and Resources Initiative (RRI), Food and Agriculture Organization (FAO) of the United Nations, Bharti Institute of Public Policy, Indian School of Business (ISB), and Tata Institute of Social Sciences (TISS). The reports were also accompanied by the launch of an interactive tool, supported by RRI, to track land conflict in India.