Over 400 families formed a peaceful encampment outside the National Palace in downtown Guatemala City last week. According to the Farmers Committee of the Highlands (Comité Campesino del Altiplano, CCDA), families are asking for access to land, the resolution of agrarian conflicts, a stop to forced evictions and an end to the criminalization of community leaders.

On April 22, the day began with more evictions. Over 25 families from the communities of La Concha and San Juan 3 Ríos in Cobán, Alta Verapaz were evicted. At the peaceful encampment, the presence of riot police was seen as way of intimidation, stated the CCDA. Beginning with a peaceful march on the morning of April 17, men, women and children made their way to the presidential house asking the head of state and congress to take action. One of the main goals of their activities is to ask for a resolution to the 116 cases of agrarian conflicts pending before the court. At 10 a.m. on April 20, family members and the CCDA met with the president, the minister of agriculture, members of the Land Fund and other officials asking for short-term solutions. The CCDA prioritized 40 cases which it deems the most important and asked for a follow-up meeting on April 23. Additionally, they are asking for a meeting with Attorney General Thelma Aldana to address the criminalization of community leaders and extrajudicial forced evictions. To the CCDA, the meeting is a step in the right direction in a process of dialogue that which began 5 months ago. 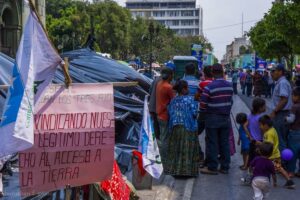 These actions are a direct way to bring attention and denounce the lack of political will of the state in addressing the needs of the indigenous farming communities and to ask for a stop to the repression, criminalization and violence. CCDA added that in light of the neglect Maya Q’eqchi’ communities suffer from the judicial system,  they have been planning these activities for several months.

The encampment is a family space; there are families gathered in all places and children and teens can be seen playing soccer on the streets. Despite for what the CCDA calls “intimidation tactics” by way of regular police and military patrolling in the area, there is wide neighborhood support and organizations have shown their solidarity by visiting the site. The families gathered at the National Palace originate from Cobán, Alta Verapaz, also suffered forced evictions during the internal armed conflict under the dictatorships of Romeo Lucas García (1978 – 1982). The effects of the conflict can still be felt today by economic and social practices based on exclusion, discrimination and racism. Extractive and exploitative mega-projects are promoted by the government without taking into account the needs and demands of the affected, which primarily consist of indigenous populations.

The CCDA is an indigenous farmer’s organization that has been working through the country in support of rural communities since 1982. It organizes activities at both the local and the national level. Currently, they are advocating a new law for integral rural development. Families have stated that they will remain in the peaceful encampment until they hear a favorable resolution from the president and Congress which would allow them to walk away with the title to their lands in their hands.