New data gathered from Afro-descendant community councils and state records reveal that the Colombian government has failed to address 271 claims for collective Afro-descendant land rights—threatening cultural and environmental sustainability, the rights of Afro-descendant community territories as established by Law 70 of 1993, and the successful implementation of the peace accords. Although all 271 communities have submitted formal applications for collective land titles, the government has largely delayed recognition of their claims—in some cases for over a decade.

“The recognition of the collective territories of Afro-descendant communities is fundamental for the conservation of vital ecosystems, [and] for the survival and wellbeing of these peoples, and in the present context, it is essential to achieve lasting peace and stability,” said Johana Herrera, director of the Pontifical Javeriana University Ethnic and Peasant Land Observatory (OTEC), in an interview ahead of the launch of a new database documenting the 271 unresolved land claims.

The launch of the data, interactive platform, and explanatory video took place on December 12 at a public event in Bogotá, Colombia. The event—co-organized by the OTEC, the Black Communities Process (PCN), the National Afro Colombian Council of Peace (CONPA), and RRI—presented the results of a collective research effort to compile all official data on existing Afro-descendant land claims and update this information with inputs from the community councils themselves.

The database is the first technical tool to provide georeferenced data on collective Afro-descendant territories in Colombia that lack legal recognition and titles. “This project is participatory and collective. Every source of information that we encountered was scattered, disorganized, and inexact… we identified 271 community councils that have requested land recognition from the government,” explained Herrera during the event.

The government has largely failed to take any administrative action to recognize these collective titling requests. In some cases, applicants have been waiting for over a decade. OTEC identified geographic information for 148 of the applications, representing about 1 million hectares of ancestral land. This data reflects only a fraction of overall Afro-descendant ancestral land claims, and the lack of recognition and titling has put communities at risk. Of these 148 claims, OTEC found that at least 77 are threatened by megaprojects, mining operations, and road projects. 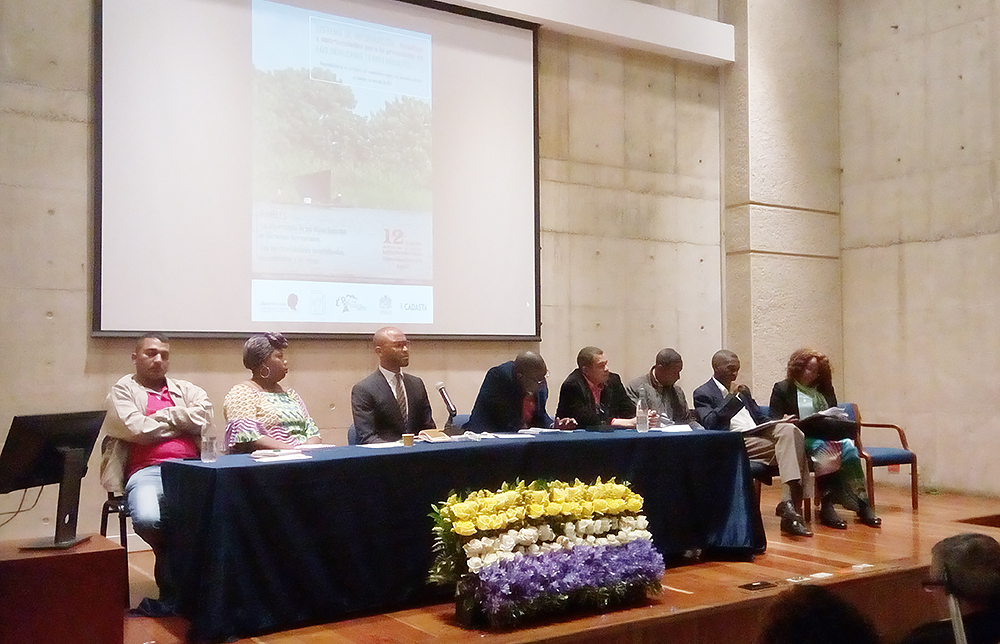 Charo Mina, a member of CONPA, said in an interview that “Black, Afro-Colombian, Raizal, and Palenquero communities have guaranteed the sustainability of natural resources and ecosystems as an integral part of their concept and experience of the land.” During the event, Afro-descendant community leaders elaborated on this perspective by speaking directly to indigenous and Afro-descendant organizations, government leaders, and the press about the shared experience of having their culture, land claims, and ecosystems historically neglected by the state and challenged by megadevelopment projects.

Astolfo Aramburo, who spoke on behalf of the PCN, emphasized that the implementation of agrarian reform within the Colombian peace accords could threaten communities’ ancestral claims and their wellbeing. While the peace agreement raises the issue of equitable access to and democratization of land, at least 100 of the Afro-community land claims examined overlap with areas currently defined by the government as vacant plots of land, or baldíos. These baldíos are set to be distributed as part of the peace agreement’s agrarian reform and rural development efforts, and a failure to resolve overlapping land rights could set the stage for new land-related conflicts. It could also result in a rollback of historical gains under Law 70, passed in 1993, which recognizes the collective land rights of Afro-Colombian communities.

“It is necessary to start a national discussion about the baldíos that the state intends to develop under the agrarian reform of the peace accords. If the peace agenda seeks to reform the structure of the countryside in Colombia, it cannot be at the expense of the collective lands belonging to ethnic communities,” Aramburo said.

While the new platform illustrates the gravity of neglecting to respond to community titling requests, it has also been presented as a contribution on the part of communities and civil society that equips the government of Colombia with necessary information to promptly resolve outstanding land claims, and prevent further land conflicts. Taking action to resolve these claims can help preserve not only the culture of Afro-descendant communities, but also their diverse ecosystems, and can help the country build lasting peace.

To learn more about this project and to view data for individual communities, visit the interactive platform here and review the accompanying analysis here (in Spanish).

About the author: Mary Alice Jackson is the Latin America program intern at the Rights and Resources Initiative.