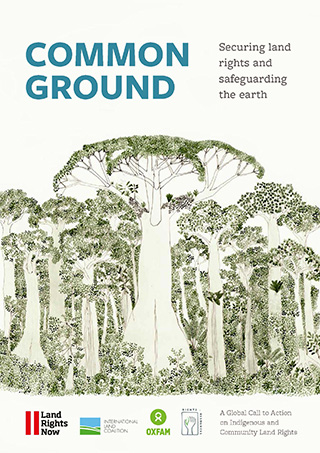 Up to 2.5 billion people depend on indigenous and community lands, which make up over 50 percent of the land on the planet; they legally own just one-fifth. The remaining land remains unprotected and vulnerable to land grabs from more powerful entities like governments and corporations. There is growing evidence of the vital role played by full legal ownership of land by indigenous peoples and local communities in preserving cultural diversity and in combating poverty and hunger, political instability and climate change. The importance of protecting and expanding indigenous and community ownership of land has been a key element in the negotiations of the Sustainable Development Goals and the Paris Agreement on climate change, and is central to their successful implementation. This report launches a Global Call to Action on Indigenous and Community Land Rights, backed by more than 300 organizations all over the world. It is a manifesto of solidarity with the ongoing struggles of indigenous peoples and local communities seeking to secure their land rights once and for all. Learn more about the Global Call to Action at landrightsnow.org.