CLARIFI is a new international funding mechanism led by RRI and Campaign for Nature. It aims to contribute to raising US$10 billion by 2030 and strategically deploying public and private funds to scale up the formal recognition of Indigenous Peoples’, Afro-descendant Peoples’, and local communities’ land rights, conservation, and sustainable management of their territories.

The Community Land Rights and Conservation Finance Initiative (CLARIFI) was formed by RRI and the Campaign for Nature to fulfill a critical gap in the current ecosystem of funding for Indigenous and community rights and conservation.

About 1.8 billion Indigenous Peoples, Afro-descendant Peoples, and local community members claim, live in, and steward the Earth’s most critical ecosystems: home to the vast majority of global biodiversity and 800 GtCo2e, all at risk of conversion by outside actors. Lands that are legally owned and managed by these communities demonstrate far lower deforestation rates and higher rates of carbon storage than other protected and unprotected areas. But despite these contributions, Indigenous Peoples and local communities own less than 15% of all forest lands globally.

Over the past decade, less than 1% of global climate funding has gone to Indigenous Peoples’ and local communities’ forest management. And just one-tenth of that 1% was directed towards securing their land tenure rights. The situation is even worse for Indigenous, Afro-descendant, and community women, whose land and resource rights are particularly constrained by unjust laws and practices despite their roles as forest and household managers, food providers, and rural enterprise leaders.

What will CLARIFI do?

Through targeted funding, coordination, and multi-level advocacy, CLARIFI will help Indigenous and community rightsholders tap into new and existing funding to expand the mapping and formal recognition of their lands, and to create and implement plans to support their conservation, livelihoods, gender justice, and self-determined development.

CLARIFI will mobilize large-scale funding from diverse sources concurrent with technical and organizational support. Its regranting mechanism will be flexible and able to operate in various developmental and political contexts to coordinate with many different types of organizations to support a broad range of activities. It aims to raise USD $10 billion between now and 2030 to achieve the following goals:

How will it work? 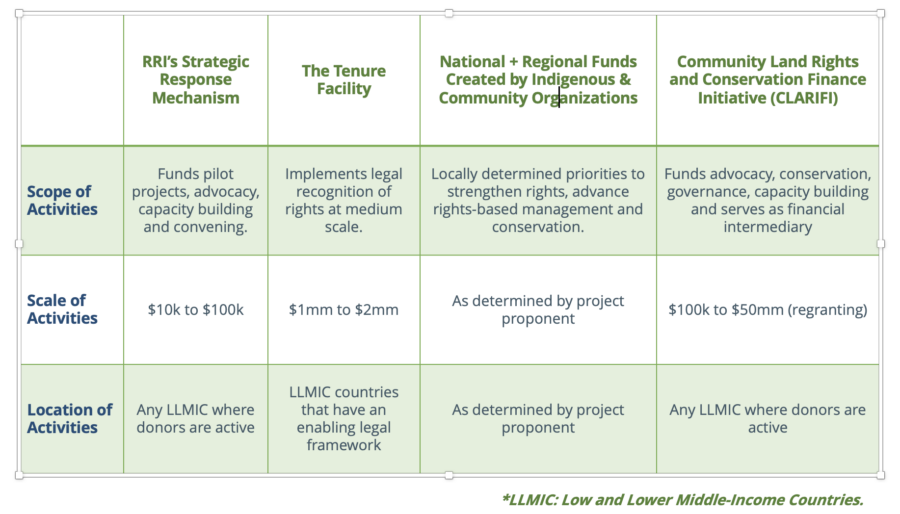 CLARIFI’s design and early implementation is being guided by an advisory council including Indigenous and community rightsholder representatives from Asia, Africa and Latin America, as well as its founding partners (RRI and Campaign for Nature).

Read the full web announcement on The Land Writes Blog.

CLARIFI is an initiative by the Rights and Resources Initiative and Campaign for Nature.